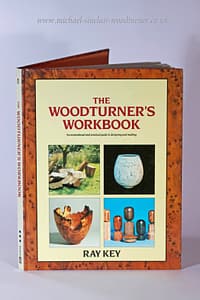 This is the first woodturning book Michael bought. Having been born and bred in Orkney Michael had no woodturning club to go to, or any other woodturner to show him the ropes so all he could do was teach himself and this was a start (along with a lathe and some tools).

Ray Key was a phenomenal woodturner based in the south of England. I say was because unfortunately he passed away last year, a tremendous loss to the woodturning world. He was the founding Chairman of the Association of woodturners of Great Britain , a prolific turner, teacher and demonstrator. He also did much to encourage youngsters into the craft. I very talented and kind hearted gentleman. Unfortunately Michael never got to meet his hero.

A few years ago we bought a piece of Ray Keys work. 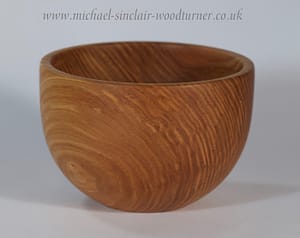 Last year while at the AWGB seminar we purchased 3 of Rays rough turned bowls from a bunch that were up for sale.

The smaller one sits on the shelf next to the Ray key bowl as it is the rough turned versions of the finished bowl we have.

But then a great opportunity came up. Ray had left a lot of rough tuned pieces so they were distributed to professional woodturners from around the world who had known Ray, to complete as they felt fit and then they would all be auctioned. The Ray Key Collaboration.

Once completed a book on the collaboration was published and the pieces put up on the internet for all to see. We purchased a book immediately and began to look through it to see which piece we were going to bid on.

Several pieces were picked out. We looked at what had been done with the original form and also how much  the collaborating woodturner had put their own stamp on it. Michael also had a few woodturners who had played a part in inspiring him at the beginning of his own journey, ones he had wanted to own a piece of work from and add to our collection.

Well if you have ever taken part in an auction its a bit of an infectious situation, exciting and great fun. We pushed and pushed our bid for the piece we had chosen and eventually, going slightly (or maybe a bit more than slightly) over our original budget, won the piece. That was going to be the end of it, but we were interested in how all the pieces did and generally in the auction so we continued to watch. Our other watched piece came along, our original bid was soon beaten. A quick discussion ensued and the fact that an opportunity like this wouldn't come along again, we once more joined in the bidding. We set our limit, which seemed to keep creeping up and next we knew it was ours too. We were delighted.

Today they arrived and we got to handle them for the first time. They are both stunning and very special.

John's bowl turning and hollow form videos were 2 of the first woodturning tutorial videos Michael bought and were watched many times. This is why Michael was keen to aquire this piece.

Michael first came across Molly's work, quite a few years ago now, on one of the American woodturning  forums and always admired it. I had a bit of a strong influence into bidding for this piece as with my history with horses I loved the mustang decoration.

The auction raised £30,000 which will be divided between Rays wife and the AWGB. The AWGB are using it to set up a bursary in Ray's name.

A massive thank you to all who were involved.