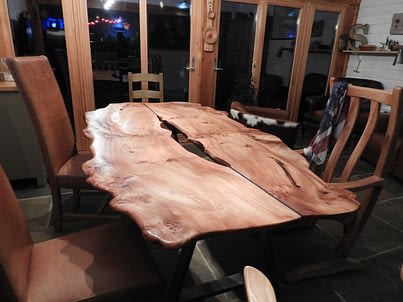 Lots of eating outside🍽 resulted in our old dining table not really being an inside table anymore, that’s my excuse😉, so I managed to persuade Michael to use some elm boards that we had in the shed to make us a replacement. 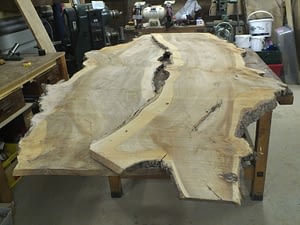 I am one of these people who wants things ‘yesterday’, nightmare for my poor husband😱. I did help, (well that was how I looked at it) We cut, sanded, oiled and the result was a beautiful waney edge table. I ordered some metal legs from ‘not on the High Street’ and there it was, pride of place and fantastic.

We have a couple of chairs made by http://www.robelliotfurniture.com and bought the rest from http://www.indigofurniture.co.uk  they all fit in really well with the table. The metal legs work well on the wonky Orkney flag floor. 👍

*The cat fell through the hole – no sympathy he shouldn’t have been up there. 😾

*Due to my ‘yesterday’ thing it possibly could have done with lying flat for longer to stop the warping – no problem, just a few places where you don’t sit if having soup or gravy!!!!! 🍲

*Despite all Michaels efforts the warping caused issues with the joins – where there’s a will there’s a way. Router, make-shift dams and resin- sorted.👌

Poor Michael. He would love to make another, (classing this one as a prototype), using thicker, flatter boards, (possibly keeping me out of the way too), but hopefully he will not get round to it as I love it and all it’s quirky ways. There has been many folk around the table, eating🍛, drinking🍻, and having fun 😆, making memories all of them and hopefully many more times to be had. My vote is – KEEP. 🤞