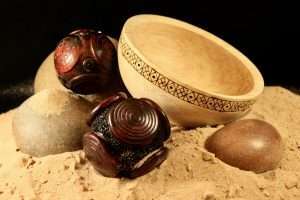 This is the general name for stoneballs either created by hand or nature. The hand-made petrosphere fashioned by the Neolithic people have been a fascination for Michael for years, why were they made?, how did they manage it?. The decorated designs on them are sometimes very elaborate and always very beautiful.

There have been several suggestions to attempt to explain why people were driven to produce stone balls on such a large scale (as in the case of Scotland and Costa Rica), ranging from symbols of wealth or status to geometric aids or because of their serene, harmonic beauty, but there are more than enough examples to show that stone itself was given a form of reverence in prehistory, and was likely seen as being endowed with ‘special' qualities

Most of the stone balls conform to a standard size and over half have six embossed geometric knobs carved onto them, although some have as many as 160 dimples engraved on them.

Over 400 of these small geometric carved stones have been discovered in Scotland. Curiously, they appear to have been made with an understanding of the ‘platonic solids', as the majority of them have been designed to conform with one of the five geometric solids. 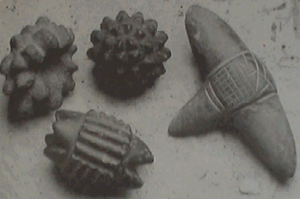 Perhaps the most important discovery of carved stone balls was made at the Neolithic settlement at Skara Brae here in Orkney. The excavations there provide a contextual date placing them firmly in the Neolithic. Furthermore, it was one of the very few occasions when more than one ball was recovered. They are usually encountered as stray finds as a result of agricultural activity. Therefore Skara Brae provides a wonderfully rich context for these objects, as they were found in context with other ground stone tools and in-situ at a Neolithic habitation site.

A recent find at The Ness of Brodgar fuelled Michaels curiosity even more.

Michael has been developing a range of ‘Unstan ware’ and ‘Grooved ware’ inspired wooden bowls for the past year, hand decorating them with geometric designs found on Neolithic sites here and recently has been using hematite (as did the Neolithic people) to colour some of the bowls. 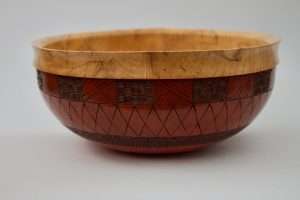 It was inevitable that he would turn and decorate a wooden ‘petrosphere’. 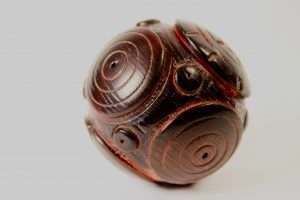 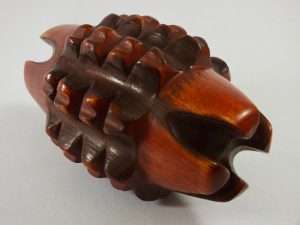